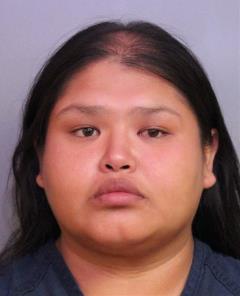 On Wednesday, May 27, 2020, PCSO deputies arrested 28-year-old Samantha Mariel Angeles-De La Rosa of Bartow, charging her with one count second degree murder (F1), and two counts aggravated child abuse (F1), in the death of a four-month-old infant who was in her care. Neither the victim's identity nor any information that would tend to identify the victim will be released, as it is confidential and exempt per Florida Statute 119.

According to the affidavit, around 9:45 a.m. on Tuesday, May 26, 2020, PCSO and Polk County Fire Rescue responded to Angeles' home where the victim was unresponsive. Despite their life-saving efforts, and the efforts of hospital staff, the victim was pronounced deceased at Winter Haven Hospital approximately one hour later. The baby had multiple bruises on her body, head, and face. Angeles told deputies that a 21-month-old toddler in the home pulled the victim off of a changing table and onto the floor, causing the injuries that proved to be fatal. She was the only adult in the home at the time. She continued to tell versions of this story to detectives investigating the death, including saying that the toddler had been "rough" with the victim previously, using toys to hit the baby in the face.

After the autopsy, detectives interviewed Angeles again. This time, Angeles told detectives that previously she had pulled the baby out of the car seat too forcefully, and the baby's arm got caught in the seatbelt. She said one time she got mad and squeezed the victim hard around her abdomen, causing her to cry. She stated that the incidents occurred "over the last several weeks." However, she continued to blame the baby's death on the toddler pulling the baby off of a changing table.

Later in the interview she admitted that the morning of the incident, she began to change the baby's diaper, but the baby would not stop crying and Angeles immediately began thinking about "how overwhelmed she is in life." Angeles stated that when the victim began crying, she also began to cry, and then "lost it in a split second." Angeles grabbed the victim by the shoulders and struck the victim's head two times "hard" against the wood frame of the changing table.

She was taken into custody and booked into the Polk County Jail, where she is being held without bond until a first appearance hearing this afternoon. Her criminal history includes a 2016 arrest for no valid DL, and a 2019 arrest for battery domestic violence.

“There is absolutely no excuse to hurt a baby. We will hold this woman accountable for her actions. If anyone caring for a child is feeling overwhelmed or out of control, please seek help from family, friends, clergy, or a social services agency. Get help. If anyone has direct knowledge of anyone hurting a child, report it to your local law enforcement agency or the Department of Children and Families Abuse Hotline at 1-800-962-2873.” - Grady Judd, Sheriff