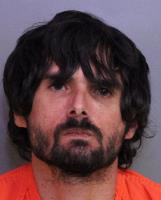 DeVane of Fort Meade charging him with 3 counts using a child to engage in sex acts (F-2) and 70 counts possession of child pornography (enhanced) (F-2). The charges are enhanced because the images/videos met one of the following criteria per FSS 755.0847:

This investigation began in May of 2020 when Computer Crimes detectives were notified by the Fort Myers Police Department of a tip they received from the National Center for Missing and Exploited Children (NCMEC) that images/videos of child pornography were being downloaded from an address in Fort Meade. During the investigation, detectives discovered homemade images/video depicting DeVane sexually abusing children he had access to.

During the investigation, detectives seized a cell phone belonging to DeVane. There they located 70 images/videos depicting child pornography, with victims between the ages of 2 and 12 years-old being sexually abused.

“DeVane not only engaged in child pornography, he also committed lewd acts in the presence of a baby he had access to – and filmed it. I am grateful, that with the help of our partners at NCMEC, our detectives were able to lock him up and rescue his victims from that beyond horrific environment.” – Grady Judd, Sheriff

The Department of Children and Families was notified. DeVane has been booked into the Polk County Jail and is being held on no bond until his first appearance hearing which is scheduled for tomorrow. DeVane’s criminal history includes 3 felonies and 11 misdemeanors.

The investigation is ongoing, and pending a forensic examination of his electronic devices and a screening of the children he had access to, additional charges are possible.