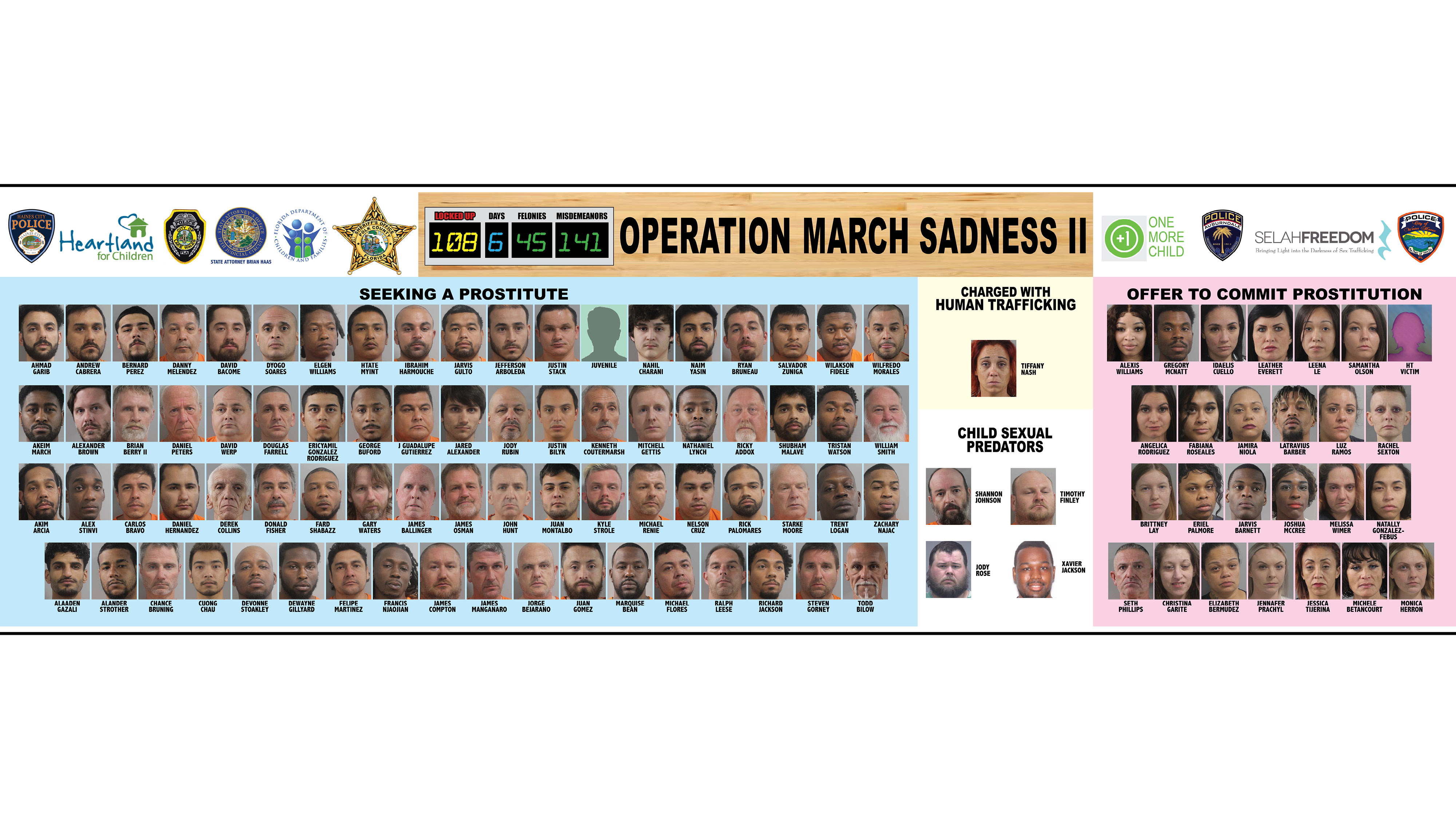 108 people were arrested by the Polk County Sheriff’s Office Vice Unit during a six-day undercover human trafficking operation, "Operation March Sadness 2,"  which began on Tuesday, March 8, 2022. PCSO was assisted in the effort by police departments from Winter Haven, Haines City, Lake Wales, and Auburndale, as well as the Office of the State Attorney 10th Judicial Court, members from the Florida Department of Children and Families (DCF), and anti-human trafficking organizations: One More Child, Heartland for Children, and Selah Freedom of Sarasota.

Detectives identified prostitutes who posted online advertisements as well as the “johns” who were seeking out the prostitutes via online communications, with the intent to identify and free any victims who were being forced into prostitution (human trafficking), or anyone participating in the trafficking of victims. Detectives also identified and investigated adults who engaged in on-line sexually charged communications with those they believed were children—four men were arrested for preying on children online.

“The arrests of a human trafficker and four child predators alone makes this whole operation worthwhile. The on-line prostitution industry enables traffickers and victimizes those who are being trafficked. Our goal is to identify victims, offer them help, and find and arrest those who are profiting from the exploitation of human beings. Johns fuel the trafficking and victimization. Where there is prostitution, there is exploitation, disease, dysfunction, and broken families.” - Grady Judd, Sheriff.

Undercover detectives communicated online with the suspects and arranged for a meetup at a location where they were arrested after their arrival.

Members of the anti-trafficking organizations were on hand to speak with the prostitutes to help determine if they were human trafficking victims—they were offered services and counselling.

The oldest person arrested was 67-year old Derek Collins who showed up to the residence drinking Ensure, the youngest was a 17-year old male. Both were arrested for soliciting for a prostitute.

Among the 108 arrests made, there were several which stood out.

Human Trafficking Suspect:
32-year old Tiffany Nash of Orlando was arrested for trafficking another woman in prostitution. The woman, an adult female, arrived at the residence as a prostitute, but an investigation revealed that Nash repeatedly threatened violence against the victim if she didn’t prostitute herself. Nash would take all money derived from the victim’s prostitution. When Nash arrived at the location to check on the victim, she was taken into custody and charged with: Human Trafficking (F1), Deriving Proceeds from Prostitution (F2), Possession of Cocaine (F3), Possession of Methamphetamine (F3), and Possession of Drug Paraphernalia (M1).

Nash’s victim was provided the assistance of one of the anti-trafficking organizations.

Child Predators:
39-year old Timothy Finley of Mulberry began communicating online with an undercover detective, thinking he was chatting with a 13-year old female. Finley traveled to the residence with the intent for sexual conduct with her. He was arrested and charged with: Travel to Meet a Minor/Using Computer to Lure (F2), Attempted Lewd Battery (F3), Transmit Material Harmful to Minor (F3), Possession of Methamphetamine (F3), Resisting (M1), and Possession of Drug Paraphernalia (M1).

41-year old Shannon Johnson of Orlando believed he was chatting online with a 13-year old female, sent a nude photo, and then travelled to the residence with the intent for sexual conduct with her. He was arrested and charged with: Travel to Meet a Minor/Using Computer to Lure (F2), Attempted Lewd Battery (F3), and Transmit Material Harmful to Minor (F3).

36-year old Jody Rose of Gainesville communicated online and via text with an undercover detective posing as a 13-year old girl. Rose sent sexual images and graphic descriptions of what he wanted to do. A warrant was obtained on Rose for Transmission of Material Harmful to a Minor (10-counts, F3) and Unlawful Use of 2-Way Communication Device (F3), and he was arrested in Alachua County.

27-year old Xavier Jackson of Kissimmee communicated online and via text with an undercover detective posing as a 14-year old girl. During the communication, Jackson sent sexual images and graphic descriptions of what he wanted to do. A warrant was obtained for Jackson for Transmission of Material Harmful to a Minor (3-counts, F3) and Unlawful Use of 2-Way Communication Device (F3).

Other notables…
49-year old Seth Phillips of Bradenton arrived with a woman, 34-year old Christina Garite, with the intent of both committing prostitution with two undercover detectives. When a detective tried to cancel the meet-up due to a scheduling conflict, Phillips became angry, and made demands that the undercover detectives would have to give him money for the appointment and for the drugs he was going to sell them. Phillips showed up at the residence, and when detectives opened the door, he pointed a gun at them. Phillips was arrested and charged with: Attempted Armed Robbery with Firearm (F2), Extortion/Threats (F2), Possession of Meth with Intent to Sell (F2), Aggravated Assault with Deadly Weapon (4-counts, F3), Possession of Drug Paraphernalia (M1), Offering to Commit Prostitution (M2).

42-year old James Compton of Kissimmee told detectives that he is married with eight children, and had left one of his children at a soccer game taking place nearby in order to meet with a prostitute. He was arrested and charged with soliciting a prostitute. Compton was charged with Soliciting a Prostitute (M1).

66-year old Daniel Peters of Palos Hills, Illinois told detectives that he is a retired judge (Cook County 4th Sub Circuit) and a Special Assistant for Legal Affairs at the Cook County Sheriff’s Office in Illinois. He was charged with Soliciting a Prostitute (M1).