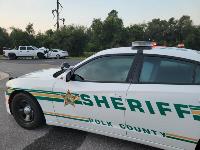 Frostproof for vehicular homicide (F2) yesterday, Sunday, June 26, 2022 after he caused a crash on S.R. 60 East at Stokes Road in Lake Wales that resulted in the death of a 27-year-old Lake Wales woman.

According to the investigation so far, at around 3:20 a.m. Poe was driving a white 2009 Chevrolet Silverado in the wrong lane - west in the eastbound lanes on S.R. 60 just east of the intersection of Stokes Road. There were three passengers in Poe's truck. At the same time, the victim was driving a white 2017 Volkswagen Jetta east in the eastbound lanes of S.R. 60 when her vehicle was struck head-on by Poe's truck.

The driver of the Volkswagen died at the scene.

The passengers in Poe's vehicle were transported to a local hospital where they were treated and released.

Deputies identified Poe as the driver - he had bloodshot eyes and his speech was slurred. Additionally, deputies smelled an odor of alcohol in the Silverado and found an open beer bottle on the rear floorboard. Also located was an open bottle of Jack Daniels Fire Whiskey on the grass median just north of the Silverado. Poe was taken to a local hospital where he is being treated for his injuries. Once released he will be transported to the Polk County Jail.

This investigation is on-going and additional criminal charges are likely.

The roadway was closed for approximately four hours in the area of the crash.